Have any questions Get An Appointment

Kibwezi  Hortipreneurs Youth Group is a Kenyan self-help group of enthusiastic youth that started its operations in 2015 and joined as a local chapter within the IITA Youth Agripreneur Program.  Its purpose is to build the capacity of youth and expose them to numerous opportunities in agribusiness and to do so in a gender-balanced and increasingly self-sufficient manner. The group started with 12 members (58% women) and is located in a semi-arid eastern Kenya within the University of Nairobi Dryland Research Station.  The University provides facilities and mentorship to the group but it otherwise operates as an independent entity and has access to the Kibwezi River as a source for irrigation.  The group holds an audited account with Kenya Commercial Bank and operate under a constitution to govern our decision making. All members are university graduates who seek careers in agribusiness. It operates several pilot agribusiness enterprises including greenhouse and field crop production, fish farming, manufacture of nutritious snacks and operation of a marketing depot in nearby Kibwezi town. It has added the TAAT technology toolkits to its operations.  These not only include crops, but also a new goat fattening activity and plans of establishing a poultry enterprise. The overall goal is to transition the group into a commercial Agribusiness Park.

Kibwezi  Hortipreneurs Youth Group has pioneered several farm innovations. It was the first Agripreneur group to construct its own greenhouses and to practice drip irrigation technology.  When offered the opportunity to produce sweet potatoes and beans, the two was combined as intercrops to make the best use of the 25 cm drip emitter spacing, and they are presently expanding this system to another one ha of land. The group also developed an innovative tent-style greenhouse and planted it with cuttings of six new virus- and drought-tolerant varieties of OFSP for the production of vines for cuttings and animal feed. They linked fish ponds to crop production through the use of effluents and even started vermiculture as a source of worms for fish feed and compost, it as also discovered the importance of adding green vegetable production as a source of daily cash flow, and continue to offer several traditional vegetables to local markets and consumers.

“We had life-transforming experience with ENABLE-TAAT” – Beneficiaries in Kenya 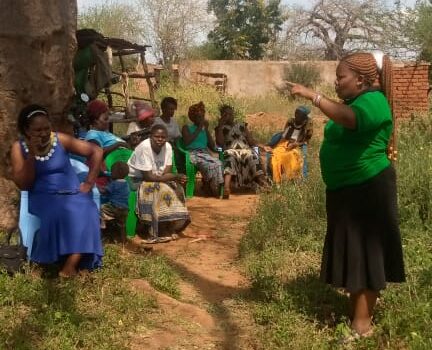 Going beyond production: How ENABLE-TAAT beneficiary is mentoring other youths

Spotlight on the Youth enterprise in Kenya